The last week and a half really haven't been much fun. Family issues, and I've also been worrying about my friends in Japan. The news of the earthquake have really upset me, so many lives devastated and in ruins.. This weekend I was also really worried about a friend who lives in Sendai. We are not in regular touch anymore but she used to be a very dear penpal and I couldn't possibly forget her. I couldn't access the internet until Sunday evening, not fun. :( I've found my friend's twitter page and she seems to be fine. Still haven't heard from a friend in Tokyo, though, and am worried. I hope she's ok..! I received this card over three years ago but I thought this would be a good time for posting it here. Tanabata is a Japanese star festival, originating from the Chinese Qixi Festival. It celebrates the meeting of Orihime (Vega) and Hikoboshi (Altair). According to legend, the Milky Way, a river of stars that crosses the sky, separates these lovers, and they are allowed to meet only once a year on the seventh day of the seventh lunar month of the lunisolar calendar. The celebration is held at night.

In present-day Japan, people generally celebrate this day by writing wishes, sometimes in the form of poetry, on tanzaku, small pieces of paper, and hanging them on bamboo, sometimes with other decorations. The bamboo and decorations are often set afloat on a river or burned after the festival, around midnight or on the next day. This resembles the custom of floating paper ships and candles on rivers during Obon. Many areas in Japan have their own Tanabata customs, which are mostly related to local Obon traditions. Large-scale Tanabata festivals are held in many places in Japan, mainly along shopping malls and streets, which are decorated with large, colorful streamers. The most famous Tanabata festival is held in Sendai from August 6 to August 8. 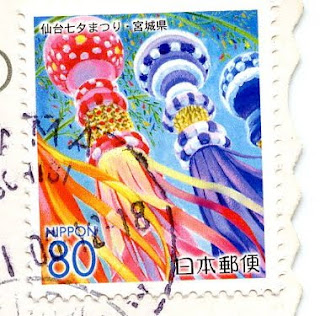 The stamp is from a set of 4 stamps issued in 2006 depicting Tohoku festivals.
Posted by Anu at 09:31