One more card for today.. This one is from a swap with Sonja in Republika Sprska. Banja Luka is the second largest city in Bosnia and Herzegovina and the administrative capital of the Republika Srpska entity. Traditionally it has been the center of the Bosanska Krajina region, located in the north-western part of the country. It is home of the University of Banja Luka, as well as numerous state and entity institutions of Bosnia and Herzegovina. The city lies on the Vrbas river and is well-known in the countries of the Former Yugoslavia for being full of tree-lined avenues, boulevards, gardens, and parks. It has been estimated that today's population of the municipality of Banja Luka is about 250,000. 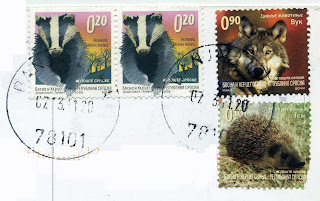 The stamps on this card are adorable! I've been looking at pictures of different stamps from Republika Sprska and there seems to be lots of very nice ones there. As for these, the ones on the left are from a set of 3 definitives issued in 2009, depicting animals (there's also a super cute squirrel stamp in this set!). The other two are from a set of 4 animal stamps issued last year. Gorgeous!
Posted by Anu at 11:05