One more card for today. This one's from 2012, received through the 'Vacation RR' on the Postcrossing forum. I rarely manage to get into the groups these days (and I do wonder sometimes how people do it as it always seems to be the same people getting into the groups O_o) but I was lucky back then. Anyway, I really like this view. 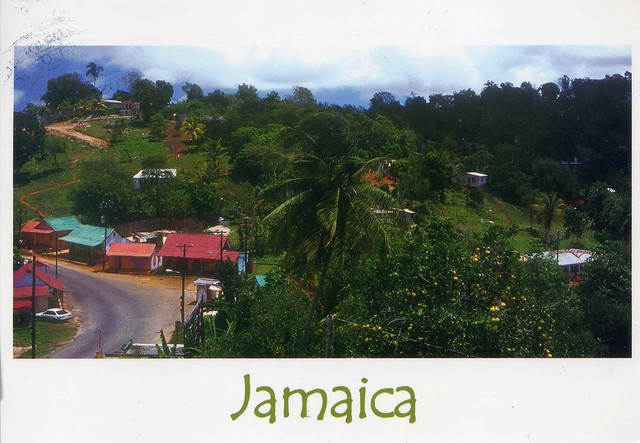 The village of Walker's Wood is located in Saint Ann, the largest parish in Jamaica. It is situated on the north coast of the island, in the county of Middlesex, roughly halfway between the eastern and western ends of the island. It is often called 'the Garden Parish of Jamaica' on account of its natural beauty. Saint Ann is the birthplace of reggae singers Floyd Lloyd, Burning Spear, Shabba Ranks, and Bob Marley. The Right Excellent Marcus Mosiah Garvey, one of Jamaica's seven National Heroes, was also born there. More recently, it has become known as the headquarters of the Jamaica Dogsled Team. 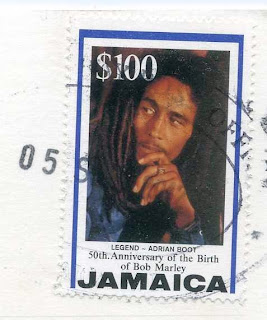 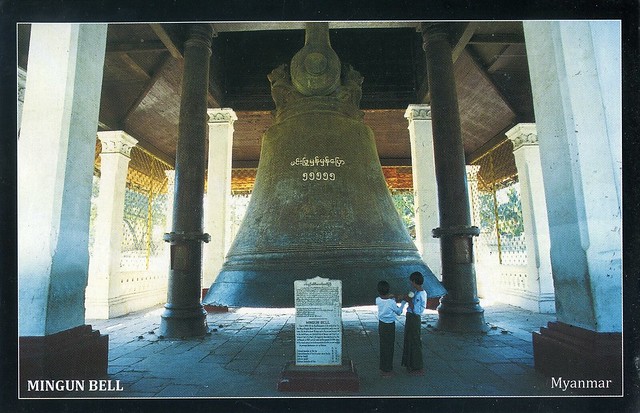 The Mingun Bell is a bell located in Mingun, Sagaing Region, Myanmar. It is located approximately 11 km north of Mandalay on the western bank of the Irrawaddy River. It was the heaviest functioning bell in the world at several times in history. 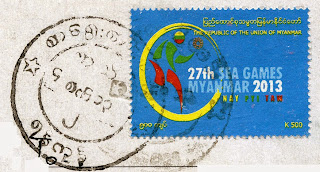 I only just realised that most of the postcards I picked for today were received in 2013. That certainly wasn't intentional, it just happened. Hmmm... Anyway, here's another swap card from 2013, this time from Kyrgyzstan. 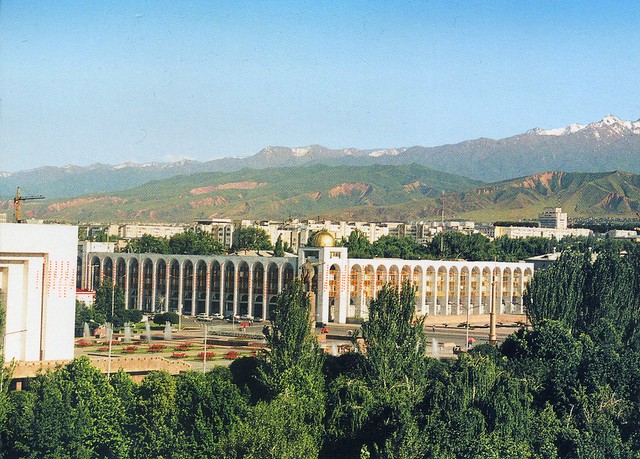 Bishkek, formerly Pishpek and Frunze, is the capital and the largest city in the Central Asian country of Kyrgyzstan. Bishkek is also the administrative centre of Chuy Province which surrounds the city, even though the city itself is not part of the province but rather a province-level unit of Kyrgyzstan.

Bishkek is situated at about 800 metres altitude just off the northern fringe of the Kyrgyz Ala-Too range, an extension of the Tian Shan mountain range, which rises up to 4,855 metres and provides a spectacular backdrop to the city. North of the city, a fertile and gently undulating steppe extends far north into neighbouring Kazakhstan. The Chui River drains most of the area. Bishkek is connected to the Turkestan-Siberia Railway by a spur line.

Bishkek is a city of wide boulevards and marble-faced public buildings combined with numerous Soviet-style apartment blocks surrounding interior courtyards and, especially outside the city centre, thousands of smaller privately built houses. It is laid out on a grid pattern, with most streets flanked on both sides by narrow irrigation channels that water the innumerable trees which provide shade in the hot summers. 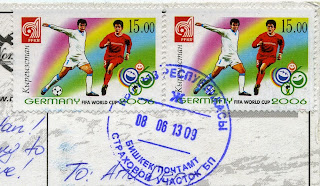 This is still one of my only written and stamped postcards from Jersey... 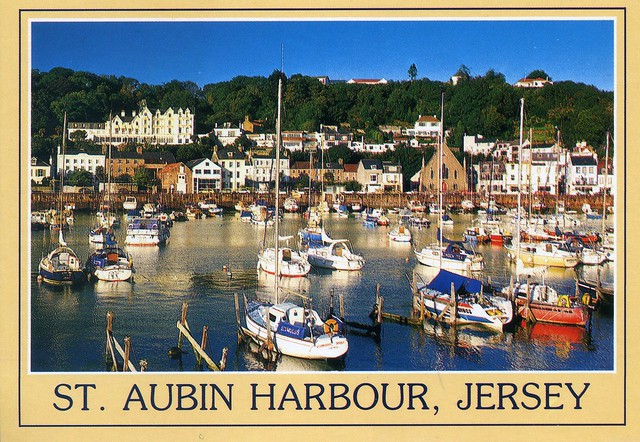 Saint Aubin is a port in the Channel Island of Jersey. It opens out to a bay of the Gulf of Saint-Malo.

Originally a fishing village located on the west side of Saint Aubin's Bay opposing St Helier to the east, St Aubin is the hub of the parish of St Brelade. Its name refers to Saint Aubin the 6th Century C.E. bishop of Angers, and may reflect the name of a long-disappeared chapel.

Saint Aubin's Fort lies in the bay on a tidal island, just outside the harbour. This fort is accessible on foot, at a low tide, via a causeway that runs from the road just in front of the Royal Channel Islands Yacht Club. The fort features a tower keep that is surrounded by granite walls and ramparts. During the Occupation of the Channel Islands, the German forces added bunkers and other features to the fort. 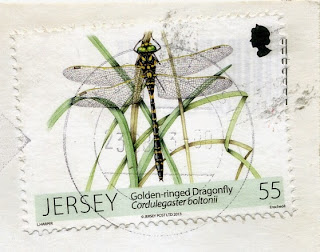 Labels: 2013, jersey
A wonderful map card I received from dear Johanna in Finland just over a year ago. This card was mailed from Finland but Johanna has actually been to the Faroe Islands - and sent me a postcard, which I blogged about here. 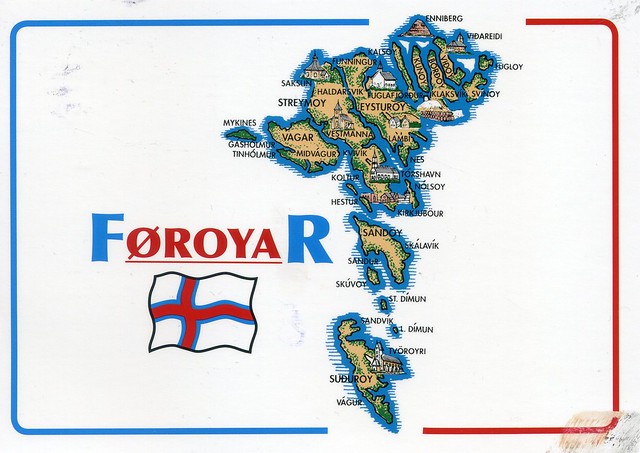 The Faroe Islands is an archipelago and autonomous country within the Kingdom of Denmark, situated between the Norwegian Sea and the North Atlantic Ocean, approximately halfway between Norway and Iceland, at about 320 kilometres north-north-west of mainland Scotland. The total area is approximately 1,400 km2 with a 2010 population of almost 50,000 people.

The Faroe Islands have been a self-governing country within the Danish Realm since 1948. Over the years, the Faroese have taken control of most domestic matters. Areas that remain the responsibility of Denmark include military defence, police, justice, currency and foreign affairs. The Faroe Islands also have representatives in the Nordic Council as members of the Danish delegation.

The islands were associated with and taxed by Norway, then the Union of Kalmar, and then Denmark–Norway until 1814, when Norway was united with Sweden. Scandinavia was in political turmoil following the Sixth Coalition of the Napoleonic Wars, when the Treaty of Kiel granted Denmark control over the Faroes, Iceland and Greenland in 1814. The Danish trade monopoly ended in 1856.

Happy New Year 2015! Mine has started pretty well postcard-wise and hopefully will continue that way.

Today's first card isn't one of the most recent ones I've received, though, but one from a swap a little over a year ago. I just love the colours here! 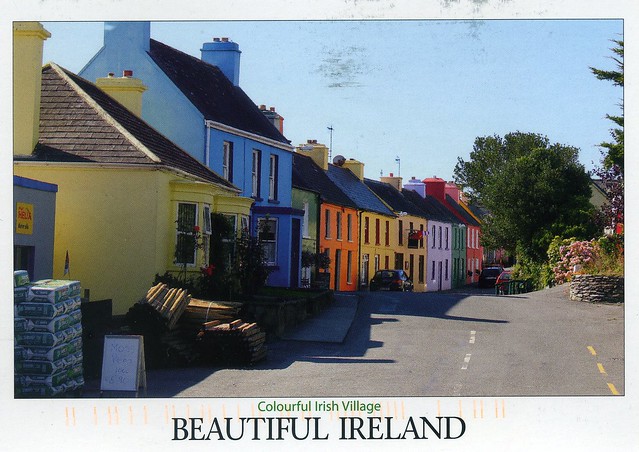 Eyeries is a village and townland on the Beara Peninsula in County Cork, Ireland overlooking Coulagh Bay and the mouth of the Kenmare River in the south-west. It lies at the base of Maulin, which, at 623 m, is the highest peak in the Slieve Miskish mountain range that forms part of the backbone of the peninsula. Eyeries was the location for the shooting of the film The Purple Taxi (1977) starring Fred Astaire, Peter Ustinov, and Charlotte Rampling, and also the 1998 TV series Falling for a Dancer, a dramatisation of life and love in 1930s Ireland based on the novel by Deirdre Purcell.

Eyeries has three pubs, a shop/restaurant and a post office (according to the information on the back of the card). 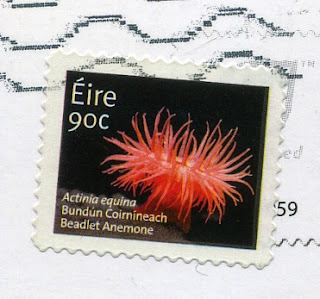