Slovenia seems like SUCH a beautiful country, it would be wonderful to get to visit it one day. A Finnish friend of mine, Keiju, got to visit it earlier this summer and treated me to this GLORIOUS postcard (the top one; the second one is from a swap with Europa stamps). Apparently it's always raining at Bled! Just look at these stunning views, though!

Lake Bled  is a lake in the Julian Alps of the Upper Carniolan region of northwestern Slovenia, where it adjoins the town of Bled. The area is a tourist destination. The lake is 35 km from Ljubljana International Airport and 55 km from the capital city, Ljubljana. The lake is of mixed glacial and tectonic origin. It is 2,120 m long and 1,380 m wide, with a maximum depth of 29.5 m, and it has a small island. The lake lies in a picturesque environment, surrounded by mountains and forests. Medieval Bled Castle stands above the lake on the north shore and has a museum. The Zaka Valley lies at the west end of the lake. The World Rowing Championships in 1966, 1979, 1989, and 2011 were held at Lake Bled. 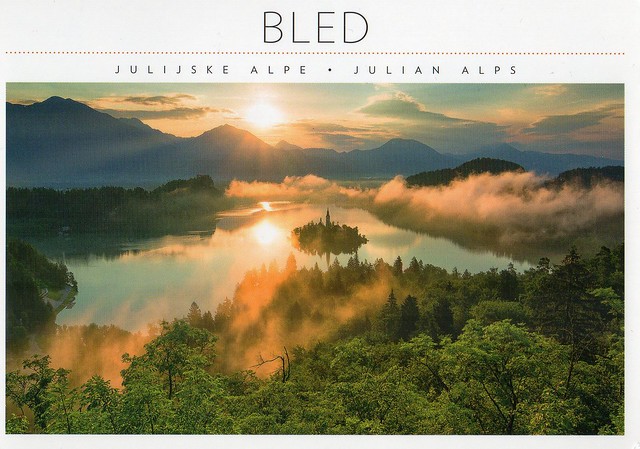 The lake surrounds Bled Island (Blejski otok). The island has several buildings, the main one being the pilgrimage church dedicated to the Assumption of Mary (Cerkev Marijinega vnebovzetja), built in its current form near the end of the 17th century, and decorated with remains of Gothic frescos from around 1470 in the presbyterium and rich Baroque equipment. The church has a 52 m tower and there is a Baroque stairway dating from 1655 with 99 stone steps leading up to the building. The church is frequently visited and weddings are held there regularly. Traditionally it is considered good luck for the groom to carry his bride up the steps on the day of their wedding before ringing the bell and making a wish inside the church. 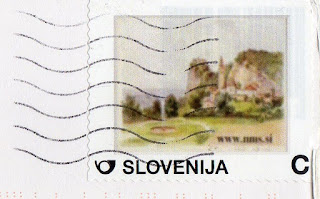 ^The stamp on Keiju's card. We were both wondering if this is a real stamp as the image is so blurry?!? 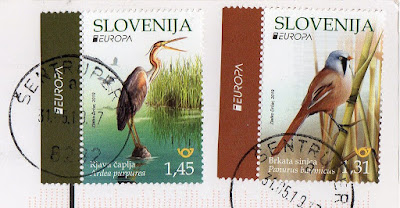 ^...and the stamps on the second card. How beautiful are they?! Once again I'm annoyed at the Royal Mail for not issuing a Europa stamp this year. Why, WHY are they not interested in participating??
Posted by Anu at 12:37